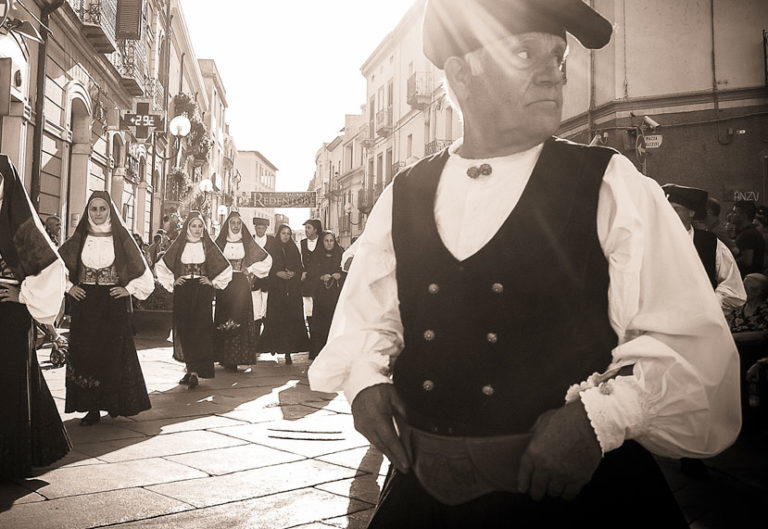 The Redentore Feast (the Redeemer) was established in Nuoro at the beginning of the twentieth century in occasion of the placement of the bronze statue of the Redentore on top of Monte Ortobene.
At the end of the 19th century, in occasion of the Jubilee carried out by Pope Leone XIII, the Pope decided to start the new century by placing on the tops of nineteen Italian regions as many monuments dedicated to Christ the Redeemer, one for each century of Christianity and the twentieth in honor of Leone XIII .

At the end of July 1899, the Cardinal Domenico Jacobini, president of the “Comitato vaticano” announced to Salvatorangelo Demartis, bishop of Nuoro, the choice of the Diocese of Nuoro as one of the locations of the statues. A local executive committee made up of forty members, whose honorary chairman was the same bishop, leading by Canon Pasquale Lutzu, was in charge of carrying out the project as well as raising the necessary funds.

The statue, which weighed 18 tons and was 7 meters high, was cast in Naples, where the sculptor lived; divided into three parts was moved to Cagliari on the steamship “Tirso” and from there it was brought to Nuoro by train, where it arrived on 19th of August 1901.

Sturdy oxen carts, lent by the local farmers, carried the statue on the top of the Monte Ortobene. The placement of the heavy pieces on the pedestal that was going to host the statue, was a real challenge. The works ended on 29th of August, when a crowd of 8000 pilgrims was already on its way to attend the opening ceremony.

Unfortunately the sculptor Vincenzo Jerace could not attend to the opening ceremony because of the death of his wife Luisa. As a tribute to him, in 1905 a headstone was placed at the bottom of the staircase in memory of his wife Luisa, with an epitaph written by Grazia Deledda in 1902:

The Redentore Feast, beyond the rhetoric, was born. It was going to be, along the years, one of the most important events both religious and touristic in Sardinia. It had a series of ups and downs due to the rapid development of Nuoro from a shepards’ village to the capital of the third province in Sardinia.

The signs of the new social order affected traditional events and their programs; the “civic festival” in 1935, for example, consisted in both traditional events, as traditional chants, fireworks, horse races, band concerts, as well as a series of events with a different content; for the first time the parade of traditional costumes was estabilished. The visitors that would join the Feast, could benefit of 50% discount on train fares.

In this way the Festival assumed a great touristic importance, losing its religious meaning, and the ecclesiastical authority was really concerned about it.

In order to overcome this awkward confusion between sacred and profane, a compromise was found. The groups in traditional costume were invited to parade in a short procession after the open-air High Mass on the 29th of August. It was decided to dedicate to the feast two different days, one in town for the parade of traditional costumes and the Regional Folklore Festival and the other one dedicated to the Religious Festival on Monte Ortobene.

Even today Redentore Festival, become one of the most important folk festival in the Mediterranean area, involves the whole town and it beckons thousands of visitors that attend to one of the most evocative event in Sardinia.